Our study for the European Parliament is published!

More than a 100 green cultural dreams – We play also outdoor!

The serious and cooperative game from inforelais helps you to green your cultural ecosystem.

As chair of the selection planel I would also like to honor the efforts from all 5 bidding cities.

More than € 25 million for innovative cultural development in cities

Guiding resilient Access to Finance ecosystems for the CCS

inforelais was founded in February 2000 - 20 years of tailored support for clients and partners!

Further information on the EU-HORIZON ROCK project report co-written by me is available online.

Use the opportunity to fill-in the survey which will close 02.12.2019 and to co-design future EU policies.

I would like to congratulate the winning city and region in my function as member of the selection panel!

Sylvia Amann appointed strategic thematic expert for Voices of Culture
Interest to participate in the debate? Follow this link

After a passive house office building, a photovoltaic and a (deliberately small) electric car we aim at sustainable office equipment.

The selection of the ECOC 2024 in Austria will take place in autumn!

The global cooperation started in the City of Jinju (South Korea) in May 2019.

Sylvia Amann was rapporteur of this report. Download of full report

Trade in Creative Goods and Services

Matera (Italy) and Plovdiv (Bulgaria) celebrate their openings in January!

At the Africities Summit Sylvia Amann, inforelais, implemented the first workshop between European Capitals of Culture and African Cities on behalf of the European Commission.

Read full article (in German only)

Sylvia Amann, inforelais, was strategic adviser for the bid

European Capitals of Culture 2024 in Estonia and Austria

The cities of Tartu and Narva were preselected on 23.10.2018 for the final selection round in Estonia

More Information from the European Commission

How to modernise support policies for the cultural and creative industries?

Read press release and read more on the topic

A travel grant for artists and cultural professionals – More info

new visions for innovative policies for the Cultural and Creative Sectors, more information

“Focus on relevance for society with contemporary authentic cultural development”

European Capital of Culture: Call for cities outside the EU

Applications must be sent to the European Commission by 10.10.2018

OMC-Report Innovation and Entrepreneurship in Cultural and Creative Sectors

was presented 12.12.2017 in the Cultural Affairs Council in Brussels

“A great potential for culture-based city development and creative city!”

Esch-sur-Alzette will be European Capital of Culture 2022

inforelais continues to assist the network in the first implementation phase

Sylvia Amann: "Focus on main challenges of society and participation is central"

Vote and discuss online to co-design these measures here

How securing cooperation between the EU and UK in the cultural sector? Link to event

Creative clusters are not only in cities! Link to study

Take part in the online surveys for the related study on www.crowdfunding4culture.eu/

inforelais was co-author of the publication “Das Kapital der Kreativen”.

Encouraged are innovative projects at the interface of science, technology and art

A valuable tool to compare digital entrepreneurship in European cities

Pre-selection of European Capital of Culture in Ireland

The cities Galway, Limerick and Three Sisters were selected for a full bid in 2016

inforelais was policy adviser to develop this new funding scheme

Annual Forum of the EU Strategy for the Danube Region

Registration is open for the annual EU culture conference.

Support and learning programme covering all 47 Council of Europe countries, Belarus and Kosovo.

To become a member of one of the design teams for future urban mobility apply before 05.07.2015!

EU report provides insight in some of the innovative practices

Croatia will host the European Capital of Culture in 2020

EU panel has preselected Dubrovnik, Osijek, Pula and Rijeka for the second round of competition

EU Prize for Cultural Heritage - Application is open for Award 2016

Seven Grand Prix winners will receive € 10.000 each – Calls and forms have been published!

How to break sectoral and regional silos to generate economic development?

New Austrian Creative Industries Report – The market of the CCIs

Participants should register before 4 May 2015 – Registration is open!

Search for partners for social entrepreneurship idea in cultural cooperation

Which new framework for sector cooperation in culture?

How couples from different countries managed to overcome obstacles? – Tell your story!

Products and projects from all EU member countries are eligible!

Registrations for these events conceived by inforelais is open until 25.11.2014!

How are the growing relationships between the tourism and creative sectors?

Call for proposals from European Commission expected for December 2014

How to support innovation in creative businesses?

inforelais INTERREG IVC report has been published at Open Days

EC Consultation on the urban dimension of EU policies – Deadline: 26.9.2014

Elements of urban development include the cultural dimension

How to best support export of the Creative Industries?

Gathering of the Danube stakeholders – Deadline for registration: 13.06.2014

Deadline for the bands in common Austrian application is 16.06.2014

Encourage citizens to vote for the European elections held between 22. and 25.5.2014

RegioStars Award 2014: Art on Chairs from Paredes in Portugal

Funding to support the CCIs in leveraging emerging ICT technologies

EU Strategy for the Alpine Region: online consultation in July 2014

Strategy includes the topic of sustainable management of cultural resources

Culture is both an enabler and driver for economic, social and environmental development

Public consulting on the review of EU copyright rules

at the Informal Meeting of Ministers for Culture and Audiovisual Affairs, 1.-2.10.2013

iCapital award for European cities with an outstanding innovation ecosystem

Financing and funding for the creative industries 2013

An online questionnaire is at the disposal of stakeholders - Deadline: 11.10.2013

5th Austrian report on creative industries has been published in English

How to integrate the innovative power creative industries in rural areas!

impulse-Call: open until beginning of September 2013

Assessment of State aid for films and other audiovisual works

President of the European Commission, Barroso at the RESEO conference

came out strongly in favour of supporting culture in of economic crisis.

providing insight in current projects of the Danish architectural scene

How to identify key issues related to international access for creative companies?

Funding for SMEs buying services from the Creative Industries

Launch of a series of short term actions for fostering creativity, innovation and internationalisation.

Submit product ideas based on the reuse philosophy

Report advocates for a stronger focus on social inclusion, audience development and education

AT creative industries will present and discuss new concepts, Brussels, 13.11.2012

Join at the workshop “INTERREG IVC capitalization initiative. How EU regions can benefit?”

It provides access to strategic projects for vouchers, finance, clusters

The next seminar is held 6 March 2012 in Vienna

will discuss the urban dimension of the future EU cohesion policy

European Commission proposes the further use of public data also from libraries, museums and archives

for Active Ageing and Solidarity between Generations

Chinese administration representatives visit Creative Industries in AT and EU

The event is part of the Innovation Union and takes place 5-6.12.2011 in Brussels

Integration of culture and CCI in new EU funding programmes

Draft regulations include rural development with relevance for culture and CCI

Challenging framework for culture and CCI, but with a clear potential for funding

inforelais-seminar on EU-funding for culture and creativity, 07.10.2011 - Warsaw

EC plans publishing of draft regulations for end of week 40

Creative Entrepreneurship – for a Competitive Economy

inforelais at the EU project workshop of CCP AT:

The Leadership Board has started with May 2011

including the topic: Culture – A smart investment for European regions?

Our study for the European Parliament is published!

More than a 100 green cultural dreams – We play also outdoor!

The serious and cooperative game from inforelais helps you to green your cultural ecosystem. 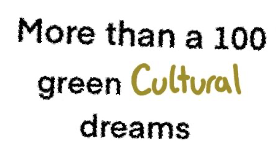